Confessions Of A C-2 Greyhound Carrier Onboard Delivery Pilot
A C-2 pilot describes how the workhorse Greyhound we know today was a very finicky and neglected aircraft years ago.
BY JAMES WALLACE AND TYLER ROGOWAY NOVEMBER 29, 2017 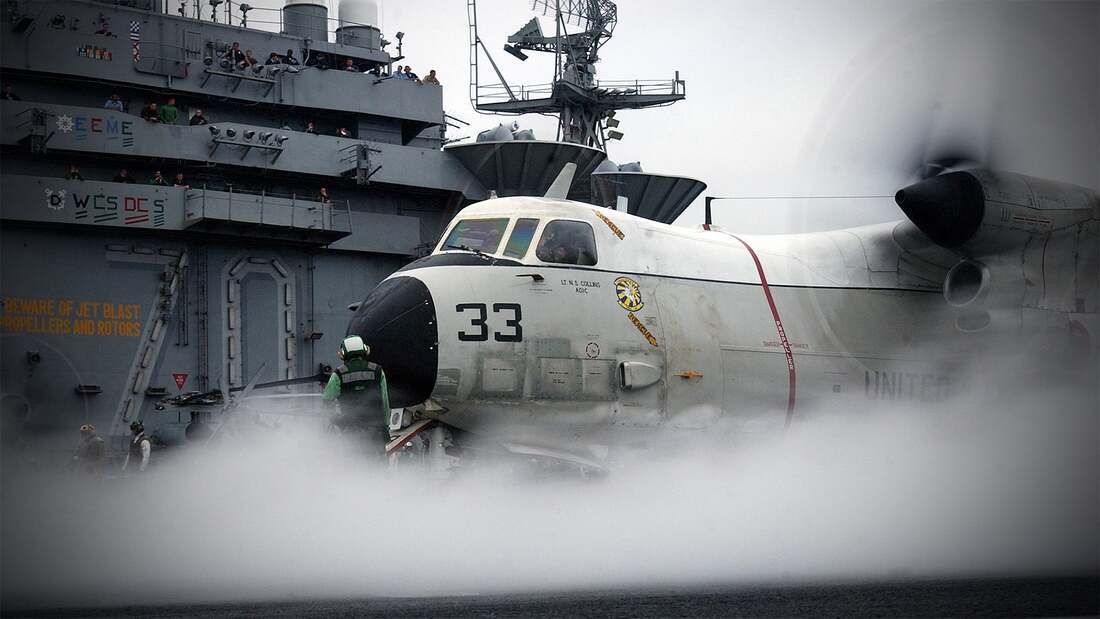 The Navy's relatively tiny C-2 Greyhound community and the carrier onboard delivery (COD) mission was in the news last week for tragic reasons. A Greyhound flying out of Okinawa to the USS Ronald Reagan went down near the carrier, which was operating hundreds of miles from land. Amazingly eight of the 11 souls aboard survived and are in fine condition, but sadly three didn't make it including one of the aircraft's pilots. They were declared lost at sea after many hours of searching by US Navy and Japanese Navy assets.
The fact is that the C-2 has a pretty impressive safety record, although according to one pilot who flew it in the 1980s, before the type was upgraded significantly it was anything but reliable and its critical mission lacked support, as well as appreciation, from the Navy. 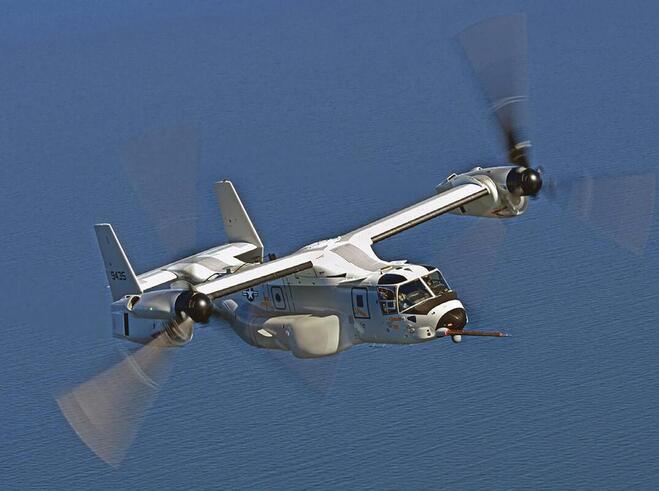 ​Perspectives on the Coming of the CMV-22B to the Large Deck Carrier
​By Mr. Robbin Laird

I first viewed a CMV-22B in person when attending the Reveal ceremony in Amarillo, Texas held on February 6, 2020. But I am no stranger to the Osprey having seen my first Ospreys at Second Marine Air Wing in 2007. At that time there were four Ospreys on the tarmac.
The plane has come a long way since then, with the Marines taking it in to every clime and place with the transformational aircraft having a significant change on how the Marines operate. Now the plane is coming in a modified form to the U.S. Navy, as it is technically replacing the C-2 Greyhound in its carrier support role.
Nonetheless, the CMV-22B is no more a replacement for the C-2 Greyhound, than the MV-22 was for the CH46. The MV-22 covered the functions of the CH-46 for the Marine Corps but represented a disruptive change; it has driven transformation of the USMC and its operations. The CMV-22B will be part of a very significant change in the carrier air wing, as it is part of a new generation of assets to operate from the large deck carrier.
This is a shift from what I call the integrated to the integratable air wing; whereas a new asset to the large deck carrier historically has been integrated into the air wing, with the coming of the Osprey, the MQ-25, the F-35C, the Advanced Hawkeye and other assets, the air wing is expanding its reach to work with assets on other ships and non-US combat assets to deliver the combat effect of the air wing.
What is being set in motion is a new approach where each new platform which comes into the force might be considered at the center of a cluster of changes. The change is not just about integrating a new platform in the flight ops of the carrier. The change is also about how the new platform affects what one can do with adjacent assets in the CSG or how to integrate with adjacent U.S. or allied combat platforms, forces, and capabilities. What is being shaped is an interactive kill web approach whereby assets coming off of the carrier can intersect with assets not organic to the carrier to expand the reach of any particular air asset from the carrier air wing, and to enhance that platform’s contribution to the joint fight.
An example of this dynamic was highlighted by the addition of air refueling for the Advanced Hawkeye. Recently, VAW126 Seahawks became the first Advanced Hawkeye squadron to qualify its pilots for air refueling. The focus of the press on this development has been upon how the reach of the Advance Hawkeye has been enhanced. Although true, that misses an important contribution of expanded reach and duration for the entire fleet, and the joint force, not just for the carrier air wing.
For example, the Marines are shaping answers to this question: How can the Marines contribute most effectively to the core Navy mission of sea denial and sea control? Part of the answer is to expand the role of the amphibious fleet and its onboard Marine Corps air and ground capability to play a key role in this mission. An Advanced Hawkeye can augment the ability of this fleet to do this mission and with the extended range with air refueling of the Hawkeye plus the coming of the MQ-25 to the large deck carrier to do that air refueling mission, the prospects of leveraging the capability of a member of the integratable air wing to provide ISR/C2 support for the amphibious task force is enhanced.
The CMV-22 is joining the Air Wing in the process of the integratable revolution. And further discussions, with the participants in the coming of the CMV-22B to the large carrier provided further insights into the process.
Last Fall, I went to Naval Air Station Patuxent River and to meet with Col Matthew Kelly, who is in charge of the V-22 Joint Program Office (PMA-275). We discussed the next phase of Osprey development. The U.S. Navy is joining Osprey Nation at the same time as the Japanese. As Col. Kelly commented: “There is no other air platform that has the breadth of aircraft laydown across the world than does the V-22. And now that breadth is expanding with the inclusion of the carrier fleet and the Japanese. We currently have a sustainment system which works but we need to make it better in terms of supporting global operations.” 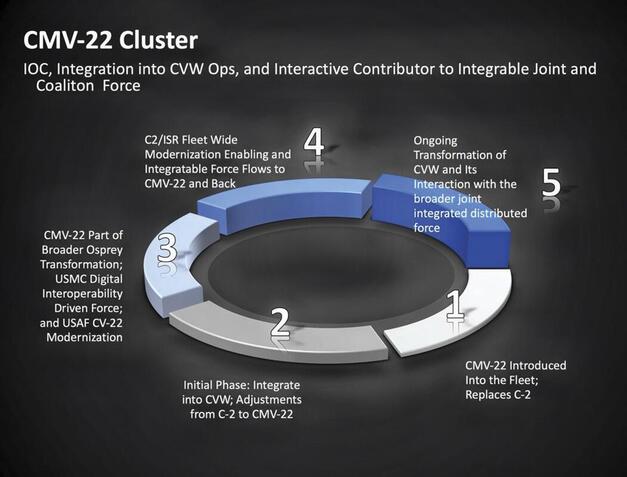 Variant CMV-22B will be the new U.S. Navy personnel and cargo aircraft

In addition to being able to take off and land vertically, Osprey can also carry 6,000 pounds over a distance of 1,150 miles. According to Bell and Boeing, it is the only onboard aircraft capable of taking engine components from the F-35C fighter directly to the flight deck.
​The U.S. Navy will receive 48 CMV-22B Osprey tilt-rotors that will be used on board the aircraft carrier fleet (Bell-Boeing)

Hawkeye’s brother
The C-2 Greyhound was introduced in the U.S. Navy in 1966 to replace the C-1 Trader, a variant of the well-known anti-submarine aircraft S-2 Tracker. Designed by Grumman, the C-2 was an adaptation of the E-2 Hawkeye radar aircraft with a wider fuselage to accommodate 26 passengers or 10,000 pounds of cargo.

In 1984, the U.S. Navy placed a new order for the turboprop but with improvements in avionics and airframe and named C-2A (R). Grumman delivered 39 units by 1990 that replaced the original C-2A’s and expanded the aircraft’s fleet.

In the mid-2000s, 36 Greyhound aircraft underwent a life extension program, in addition to receiving a glass cockpit. The most visible modification, however, was the adoption of a set of propellers with eight blades. The reform made it possible for the C-2A (R) to fly until 2027, but the Navy decided to accelerate its replacement with Osprey over the next four years.
The C-2A(R) Greyhound will be taken out of service by 2024