F.D.Roosevelt (CVA42) where are you? memories I have of VAW12/DET42.
1.  The Roosevelt was preparing to enter the Mediterranean Sea through the Straits of Gibraltar and attempted to do so without being detected.  In this attempt, Roosevelt launched an E1B off the coast of Africa and directed the pilot to fly Northwest away from the carrier. At a predetermined time, the E1B activated its radar, made bogus radio transmissions thereby giving a false location of the ship. After some 30 minutes, the E1B shut down its radar and radios to indicate it had landed on Roosevelt.  The aircraft however, returned to the original departure position and then on to the planned recovery point. Once at the recovery point the E1B found no Roosevelt, so a search pattern was instituted using the co-pilots Ouija/DR board.  No Roosevelt. As the search continued, the flight time was approaching 4 hours.  The E1B activated its radar for  a two sweep surface surveillance.  No Roosevelt.  At 4 1/2 hours the E1B used its radio to send a one word transmission - pigeons?  No Roosevelt. Finally, the E1B popped up to 5000 feet, activated all its electronics and found the Roosevelt 90 miles away. The downside was every land based Naval aircraft from NAS Rota, Spain also found Roosevelt.  It was reported it looked like an air wing fly-over with so many airplanes in formation.
2. Everyone surely remembers standing the midnight flight deck integrity watch.  The ship is in total darkness and the aircraft have so many tie-downs on that you half destroy your shins just trying to step over the chains.  Everyone also remembers "Oscar", the overboard dummy. The writer, a newly commissioned Ensign and quite impressionable, stood this watch in an alert and astute manner.  If anyone even sneezed, action was taken to correct the problem.  One night about 2AM, two sailors came running into flight deck control saying, a man had just gone overboard. As it was a full moon evening, seeing a light in the water was easy and without waiting one second (three seconds would have allowed for a second opinion) this officer pushed the General Quarters alarm horn and announced throughout the ship (1MC) "Man overboard, this is not a drill". Of course at 2AM, everything onboard the ship went crazy. As Oscar is retrieved, the Roosevelt's CO requested the Ensign to the bridge.  Amazingly the Ensign survived the "yes Sir" meeting although the use of the G.Q. horn was removed from the Integrity Watch Officer's PDL guidebook.
3. Having reported to VAW12 in March 1965, everything was a new adventure...ground school, aircraft pre-flights, link trainers, finding the old seaplane operations tower, J.O.'s meals in the BOQ, visiting the brig, no out of bounds liberty on weekends, calling on the CO, and finally getting assigned to a detachment. For this nugget, the detachment assignment opened a second set of new adventures. "Welcome on board, you are now our Communications, Assistant Personnel, Admin Division, 'Move-Rep', Weapons, and First Lieutenant".  "We are planning to deploy to Mayport,  Fla. in two weeks, so initiate the required personnel and aircraft movement paperwork".  Amazingly we actually got there. Now aboard Roosevelt (CVA42), I quickly learned the First Lieutenant officer was actually the Facilities Maintenance Manager - 'the Janitor'.  I was warned never to run out of toilet paper or light bulbs, and no matter how clean it is, it isn't clean.  The latter was the Roosevelt's response when the air wing moved off. Somehow after a May 65 mini-cruise, a July to December 65 five month cruise, and a January-February 1966 cruise, this officer become the Personnel, Educational Services/Career Counselor, and Assistant Admin Officer.  The First Lieutenant, however, was still an Ensign. Skip Moyer

I reported to VAW-12 at Quonset Point, RI, in July of 1961 and began training in the WF-2 TRACER (E1B) (WILLY FUDD). After Carquals on the SARATOGA(CVA60), I went on two short deployments with Det 37 on the FDR (CVA42) in October and November. Early in January,1962, I was assigned to the new Det 65, formed to serve aboard the Navy`s newest, largest, and only nuclear powered aircraft carrier, the USS ENTERPRISE (CVAN65) which had recently been commissioned. Under our leader, CDR Rob Roy, we prepared for the shakedown cruise throughout January with day and night FCLPs and other assorted exercises. On 30 January, we flew our four birds to Norfolk, VA, to load aboard the Big E. Our planes were towed from NAS to the carrier pier to be hoisted aboard. Just as the hookups were about to be made, we were informed that the Big E had to move from the pier to an anchorage in Hampton Roads and that we were to be towed back to NAS and standby for further instructions. After several hours, we were instructed to fly the aircraft to Hampton Roads and land aboard the ship at anchor This was something new for all of us including the LSO on the ship. After a quick briefing by our leader, we donned our poopy suits and flew to the ship and were given  Charlie. The LSO, not being familiar with the FUDD, gave our #1 aircraft a late cut which resulted in a bolter. After that, there were four normal traps, and our life on the Big E began.
The ship proceeded to Guantanamo Bay for the shakedown training, and our Det worked out of McCalla field on and off the ship until we moved back aboard on 20 March. After a successful shakedown cruise, the Det returned to Quonset Point on 9 April, where it remained until the end of July when we got word that the Big E was going to the MED to fill in for a carrier undergoing repairs. On 31 July, we flew to Norfolk, loaded aboard and were underway once again.
We entered the MED on 16 August and got to make a few more landings at anchor when we flew AEW coverage while the Task Force was at anchor in Soudha Bay, Crete, for two days. Later, we made port visits to Golfe Juan, France, and Naples, Italy. On 28 September , the Big E was relieved by the FDR , and we headed for our new home in Norfolk, VA, arriving on 11 October. That`s right , VAW 12 had moved from Quonset Point to Norfolk while we were in the MED.
I returned to my home in North Kingstown , since my family was still there and houses were not selling very quickly. I had been on leave only a few days when I received an emergency recall to Norfolk. Something was going on in Cuba, and it wasn`t good. By the time I arrived in Norfolk, the ENTERPRISE with Det 65 had already sailed for the Caribbean ; my association with Det 65 had ended.
I was reassigned to the new Det 14 under LCDR Duane DeWitt. With five FUDDS, we headed south on 23 October, not quite sure where we would end up. Our first stop was NAS Jacksonville, FL, where we stayed one night before going on to McCoy AFB in Orlando. Our mission was to fly a barrier in the Straits of Florida between the Keys and Cuba. From McCoy , this was a six hour flight: two hours to station, two hours on station and two hours back. After a few days of this routine, it was apparent that this would not work given our resources. On 27 October, we were given space at a very crowded NAS Key West to continue our mission...We then flew around the clock for over a month with each flight able to remain on station for 5 and 1/2 hours. On 5 December, we were released and flew home to Norfolk where I became one of the Palace Guard. I was detached from VAW 12 on 28 June 1963,and headed west to Monterey, CA, and PG School. I was honored to return to Norfolk and the VAW Community in 1968 to serve as CO VAW123 flying the E2A Hawkeye.
Kenneth G. Smith, CAPT, USN, Ret.
THE LITTON DUAL L-304 COMPUTER SYSTEM
Northrop Grumman Hawkeye History
Lots of fun when we received the first Willie Fuds.  Many "First Of'".  Some good, others exciting.  Pucker factor +10. 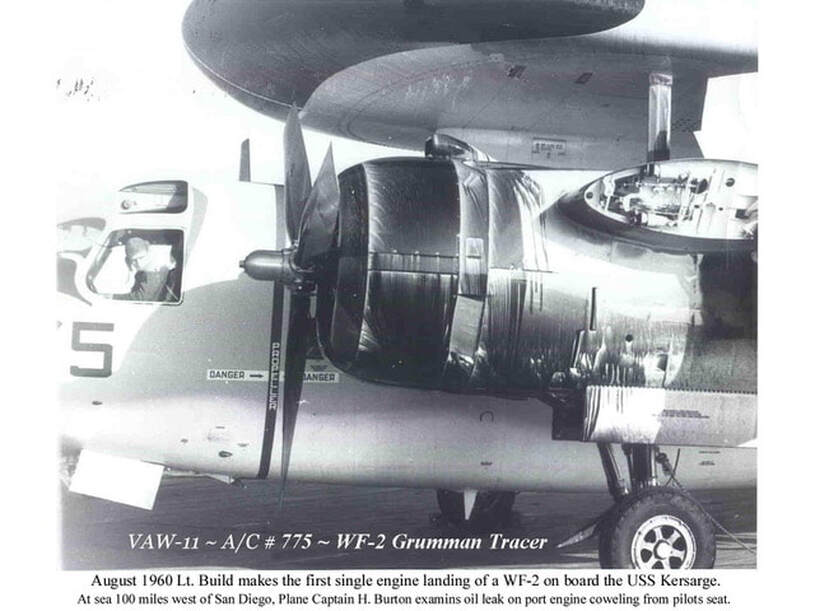