A couple weeks ago, we were able to have Midway Veteran, Craig Marburger and his family onboard. They seemed to immediately make their way to the Hawkeye aircraft that occupies the area of the flight deck right below Midway’s bridge. Once we heard his story, we understood why…

AUGUST 1972
On 8 August 1972, just as most USS Midway crewmen were looking forward to departing Yankee Station in the Gulf of Tonkin for liberty in Hong Kong, across the South China Sea at Naval Air Station Cubi Point a Midway aircraft climbed into the sky. Assigned to Airborne Early Warning Squadron 115, the E-2B Hawkeye flew north for the repair depot at Naval Air Station Atsugi in Japan to have its massive radar rotodome examined. Piloting on this delivery flight was LCDR James Anderson, co-pilot LTJG Craig Marburger, and two enlisted passengers, Aviation Maintenance Administrator First Class Bobby Cobb, and Aviation Machinist Mate Third Class R. O. Blair. Anderson experienced a close call earlier in the Midway’s wartime deployment not long after arriving off North Vietnam when his aircraft’s starboard engine shut down as the Hawkeye shot down the flight deck on its catapult launch. The large plane dropped for the ocean, but Anderson calmly retained control and coaxed the Hawkeye away from the wave tops. He expertly brought the crippled plane back around and made a successful trap back onboard.

The long delivery flight was uneventful, and when the southern Japanese island of Kyushu was 100 miles out, the Hawkeye transitioned to 21,000 feet. Suddenly, the aircraft began to pitch violently, first nose up, then, nose down. Anderson and Marburger fought with the controls to stabilize the aircraft, but the severe oscillations continued. The pilots did momentarily steady the Hawkeye, and Anderson unhesitatingly told his crew to bail out, co-pilot Marburger included. Leaving a stricken E-2 in flight is no simple task, but the three men jettisoned the door and plunged out. No sooner had Marburger left than the E-2 spun away, out of control. Anderson remained at the controls trying to regain control, but remained with the gyrating aircraft all the way to the sea below. Although Marburger, Cobb, and Blair parachuted into the sea, Cobb died before Japanese rescue forces could reach him. James Anderson gallantly gave his life to save the lives of his crew. 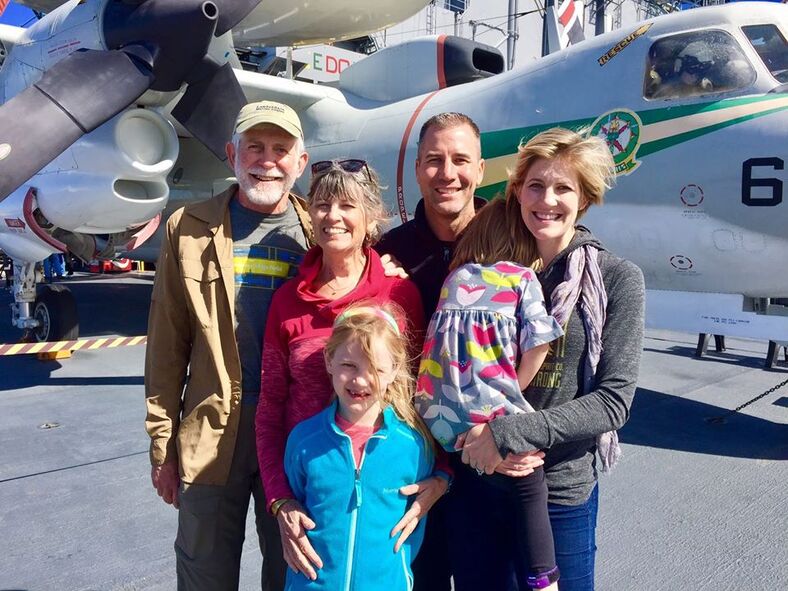 February 2017: Craig Marburg
Craig rarely talks about that day but last month he brought his family to see the ship where it all happened. Membership Director, Jill Hammons was called from her office to meet Craig & his family. Her thoughts…“I was very humbled and touched. It was really great meeting him! I LOVE MY JOB.”
Midway’s stories run deeper and more personal than one will ever know. The history and legacy of the Midway spans across the world in the memories and experiences of her crew.